Process for building a Robot 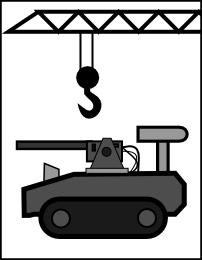 After a few years of making tweaks to Robots as Spaceships, I think we've arrived at the end goal: the ability to make a robot from the spaceships book fairly simply and easily. Right now, all the pieces are there, but we need to put them together. What follows is a guide, but it will also serve as an index to all of those articles.

These are the steps for using Gurps: Spaceships (and a little bit of this blog) to build a robot in gurps: 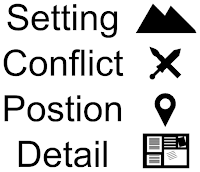 Christopher Rice suggested writing something about how people write and prepare for adventures, and I thought I'd share how I generate my adventures, or at least my adventure ideas. I love coming up with ideas and scenarios for adventures, even if they aren't always complete until the game actually gets played. I have a fairly simple set of steps I use to generate ideas, and I actually follow them pretty formally: while sometimes I'll start with one of the later steps in mind, most of the time I quickly duck back and go through the steps.
Read more »
Posted by Eric the Red at 9:40 AM No comments: Paverguard creates not only the most popular series of battlesuits in the xenospiral edge of colonized space, but heavier walkers as well. While their battle-suits keep you safe, their Striders allow you to exterminate the vermin that threaten your home!

Earlier, I wrote a post detailing a bunch of power-suits for use in a TL10 frontier setting with hostile alien beasts. In this post, I will be building the next step: TL10 combat walkers. These will be built using the method described in Walkers and Power Armor.

Paverguard's strider series are quite a bit lighter than true mecha, but are still quite heavy and have cockpits rather than being mere suits, providing a huge strength boost and heavy armor. At weights below 3,000 lbs or so, Paverguard recommends its signature battlesuit line. (That's the natural point at which this armor method begins to be more effective than the battlesuit formula)

Part of Science Fiction is engaging our sense of wonder. What if something familiar was just a little bit different? Alien wildlife is an engaging way to engage our sense of wonder. Making new alien wildlife is difficult and simple at the same time. Changing its skin covering, eye count, mouth structure, and limbs are easy, but when you're on the spot or have done it a few times recently it can be tricky.

Here, I present a list of Cat aliens. They're numbered for easy reference, as well as for use with random generators. Each space cat is different, and while they might specialize for an ecology or have additional capabilities, they should all be recognizable as "cats". They do tend towards wild versions of the creatures: its conceptually easier to convert a wild animal into a domestic one than vice versa. I should give credit to Mailanka for inspiring this with his post about Space Cats. I hope you find enjoyment and inspiration in this list!

In this post I discussed how much damage guns in spaceships should do. Its seen a fair amount of traffic, and I find myself constantly going back to it. The post generally comes to the conclusion that the damage for a given caliber and the ammunition weight is correct, but that the size of the weapon and its amount of ammunition is off, and suggests buying guns and ammunition by weight. While analyzing missiles is much more complex (and something I keep on putting off), we can use the same assumptions spaceships did to buy missiles and their launchers in the same fashion. These are the two principles:

These are rough approximations, but they give consistent results within the spaceships system. I'm using it for my current game, and the numbers seem to work out. I hope you find it useful as well!

Robots as Spaceships: Coms and Sensors Back when we were nitpicking the gun-bot, we took a look at its comms and sensors.  We found that the comms were very good, but that was tempered by the assumption that the spaceship would be using them in space. We also found that its sensors were quite lack-luster.
Read more »
Posted by Eric the Red at 2:41 PM No comments:

Email ThisBlogThis!Share to TwitterShare to FacebookShare to Pinterest
Labels: GURPS, Robots as Spaceships

I was really excited to see Infinite Worlds: Nightreign come out. I bought it the first day, and read it quickly. It was not what I was expecting. It was, however, a good Gurps book.
Read more »
Posted by Eric the Red at 8:25 AM 2 comments: