These are not quite a motive system, but its worth making a few comments about submersion here.

First off, neutrally buoyant craft needs to be a specific density. This can put some odd limitations on a chassis. A steel submersible needs to have enough volume filled with something lighter than water to be neutrally buoyant.

As we are building robots, not all chassis will need to use the rule "Depth". Deep Ocean vehicles have used various petroleum products rather than air as their "lifting gas", and as such not needed to armor those parts of the craft. A robot can be designed so that none of its systems need to be armored against pressure. Such a craft does not have ballast tanks that rely on air, and cannot use them to dive or surface. Instead it relies on brute forcing its way to the surface, being towed up by a line, or on dropping (unrecoverable) weights to reduce its buoyancy.

Pyramid 3/34 gives two charts for us to use when calculating the speed of spaceships with propellers. They are the largest charts given in the article, and they are not simple extrapolations of a basic formula. The speed of a vessel in water is an extremely complex topic.

Water is a thick and heavy fluid, and it takes a lot to push it out of the way. Water resistance is roughly proportional to cross section, which means that larger vessels are better at overcoming that resistance due to the square cube law.  From the existing table, Underwater speeds are not too difficult to extrapolate down to smaller Size Modifiers*.


*specifically, for each size modifier below SM-4, multiply the speed by 0.885, round at the end.

I'm not so sure that extrapolating below SM-7 would be accurate, and I'm not actually that sure of the last few SM in the table, but it's what we get from extrapolating the underwater speed table. 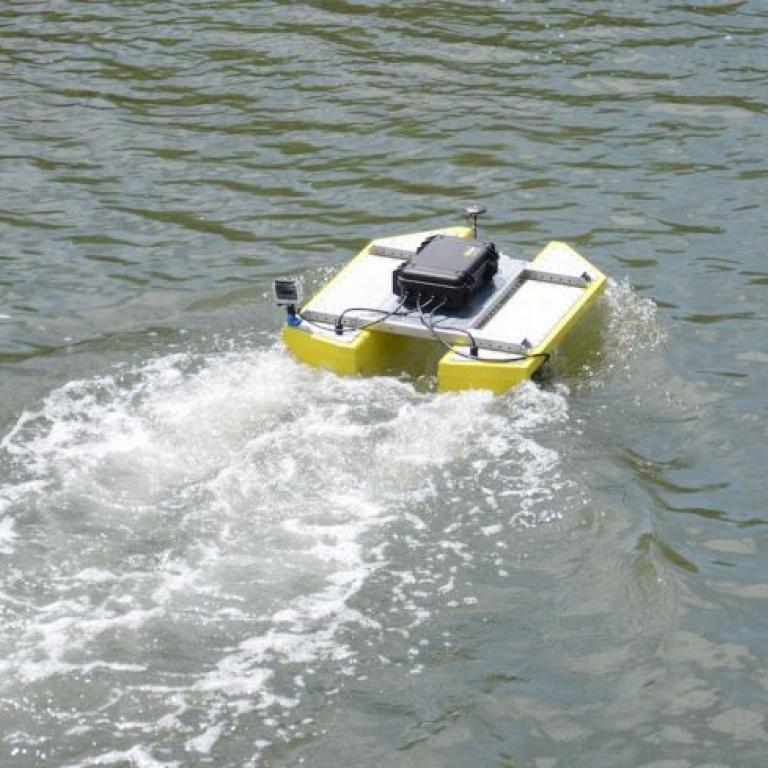 The Surface speed of a water craft is an exceptionally complex topic. For large sailing vessels, the length of the ship was vital to its speed, because it changed the length and therefore the speed of the bow wave. Even with motors, larger, longer, and slimmer vessels tend to go faster, but there are a lot of variables. Smaller boats begin to lift themselves out of the water after a certain speed, lessening water resistance. Some smaller boats can hydroplane, going over the water rather than through it. Hydrofoils actually lift up a boat hull above the water. This creates the "U" shape in the surface screw speed table in Pyramid 3/34.  The speeds for very small craft has not had a lot of effort put into them, because up until very recently their was little point to a boat that couldn't carry a human.

The best known motorized small craft are jetskis. Sea Doo jet skis are about 1/3rd engine (6 power points?)  and can reach 70 mph (move 35), which doesn't look that different than what an SM+4 spaceship can do. A jet ski is about 600 lbs, or SM+1. At some point the top speed should come down, but we're not sure what that size is.

For craft from SM-1 to SM+3, we will be using SM+4 speeds. For smaller craft, we will use the (much lower) underwater speeds. Craft below that size will struggle to cope with waves and other disturbances in the water. To be honest, most small aquatic robots I can imagine operate better if they can go underwater.

The Flexibody drive train is an ultra tech system that grants a very organic type of movement. It uses a minimum of four systems, and the speeds really aren't that high, so we will not be downshifting it.

It is a little odd that movement that relies so much on contact with the earth has top speeds four times its basic move. Thus I recommend using our responsive movement rule.

That concludes our look at aquatic motive systems. Water covers a large part of this world, but we don't spend much time on it, and even less in it. Robots are something that can change that, and I hope this article will help you explore this other world, in at least some way.
Posted by Eric the Red at 1:15 PM